Related articles:
Campaigners descended on Lake Farm Country Park once again, in the latest protest against the council building a primary school there. 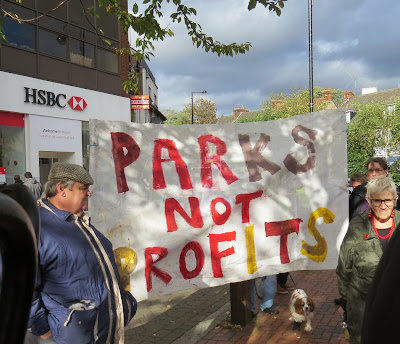 Local people joined councillors and Hayes and Harlington MP John McDonnell on Saturday morning, as they marched from the Hayes town bandstand in Station Road, Hayes, to the construction site at Botwell Common, off Botwell Lane.
People chanted and carried banners, one of which read "I can't walk my dog in Lidl" - a reference to the council selling off the former Hayes Swimming Pool site in Central Avenue, a brownfield site campaigners had urged the borough to use for a new school, to Lidl.

The discount supermarket chain is preparing plans for a new store.

Addressing the crowds, Mr McDonnell outlines concerns that the rest of the park, green belt land, would be turned over for a secondary school.

He added: "We have to keep slugging it out with them (the council) to try and prevent this development going any further, but also to demonstrate to them that we will not allow them to take the rest of the park. We'll continue to pursue whatever legal actions we can and maintain the pressure on the council." 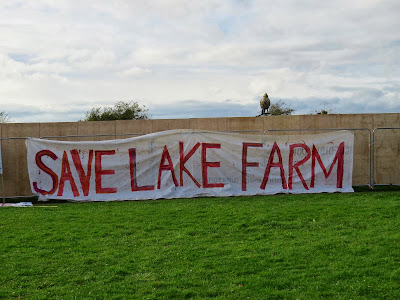 Campaigners allege that the council did not undertake an equality impact assessment when drawing up its plans for the school.

Mr McDonnell, with the Friends of Lake Farm and Labour councillors in Hayes wards have taken legal advice from Irwin Mitchell solicitors, and been advised that they have grounds to challenge the council's decision to proceed with the project. Irwin Mitchell confirmed their involvement, but cannot comment further.

The new school will accommodate 635 pupils, to help meet a projected growth in pupil numbers in the borough in the coming years, and the council has repeatedly outlined a commitment to meeting the future needs of children in Hillingdon borough when answering critics. 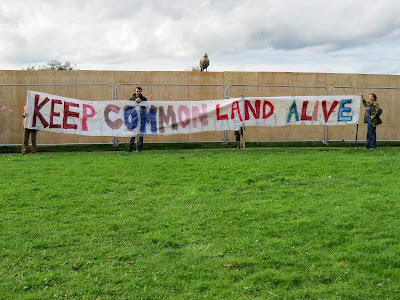 Press Release: Battle for Lake Farm Goes to the Courts and Back onto the Streets

The campaign to prevent the Council building on Lake Farm Country Park in Hayes is moving into the courts and back onto the streets with a further demonstration planned for 2nd November.

Campaigners and the Friends of Lake Farm are challenging the Council’s decision to build on Lake Farm Country Park because the council has failed to follow the proper procedures laid down in legislation when considering the impact of building on the country park.

The council is required in law to undertake a full impact assessment including an equalities impact assessment. The Council has breached this procedure by failing to undertake this assessment. Local Labour Councillors and the Friends of Lake Farm took legal advice from Irwin Mitchell solicitors and consider that they have the grounds to challenge the council in the courts. Irwin Mitchell solicitors have been successful in the past in challenging Hillingdon Council for its failure to abide by procedure.

Local MP, John McDonnell, commented “Members of the local community have expressed their concerns from the outset that the Council has rushed through this decision without proper assessment and consultation. The council has appeared hell bent on forcing through building on our park and just hasn’t done its job properly of assessing the impact of this development. With all the supposed expertise in the council and the amount of council taxpayers’ money spent on consultants to drive this project through you would expect them to do the job properly but it is clearly not the case. I am urging the council to start again and undertake a proper assessment as it is legally obliged to do.”

Leader of the Labour Group, Cllr Peter Curling said “The council didn’t even bother to take the views and needs of the local community into account when they decided to pour concrete on Lake Farm Country Park, which is a much-loved local park within the green belt. The council claimed that there were no alternative sites but they could have easily made use of the old Hayes Pool site, which they have now sold off to a supermarket chain, as well as other brown field sites in the area. This has now led to a position whereby every piece of green open space is a potential building site. The local community need their day in court especially as the council won’t even consult with them”

In addition to the legal challenge a further demonstration has been called for 12 noon on Saturday 2nd November meeting at the Bandstand in Hayes Town Centre. Residents, local councillors and John McDonnell MP are now fearful that the Council is planning to build on more of the park as it starts developing its plans for secondary school expansion. This demonstration is to call on the Council to halt the current building until the court case is heard and to stop any further attack by the council on the park.
0 comments

This is what's happening to beautiful Lake Farm Country Park

These photos were taken at the North-East corner of Lake Farm Country Park this morning, 3rd October 2013. 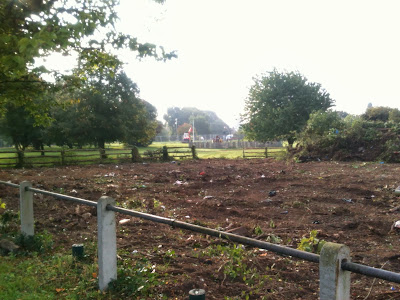 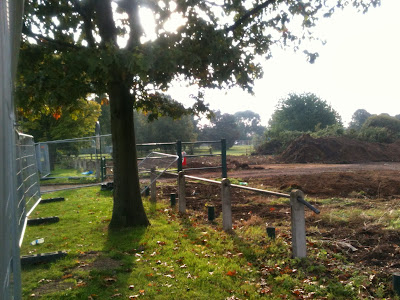 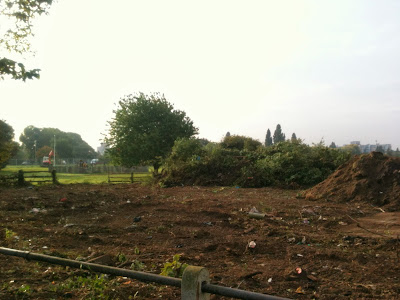 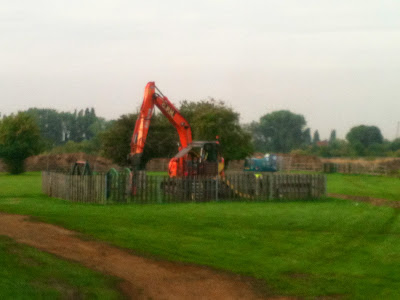 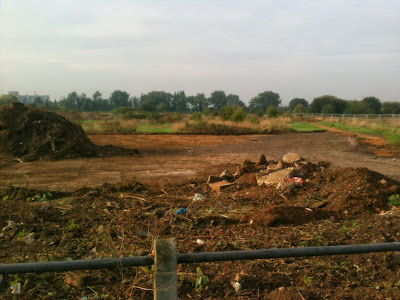 Hillingdon Council has ripped out the historic hedge that was the border between Lake Farm Country Park and Botwell Common. This act of appalling environmental vandalism has destroyed the habitat of the local birds just at nesting time contrary to the legislation protecting these habitats at this time of the year.

THE government has given the go ahead for a much-opposed new primary school in Hayes.

The Secretary of State for Communities and Local Government, Eric Pickles, has said the council’s proposal for Lake Farm School in Lake Farm Country park, off Botwell Lane is in line with national policy and should be determined locally.

The Mayor of London, Boris Johnson, announced last month that he would not intervene in the borough’s plans to build a school on the three hectares of green belt land.

Mr Johnson has been persuaded that the necessary ‘very special circumstances’ – the urgent need to provide extra primary school places – outweighs the loss of green belt.

The council examined 26 possible alternatives before concluding that the Lake Farm site was the only viable option.

“It is the policy of this administration that every child in Hillingdon will have a place at a local school when they reach primary school age. I am pleased that both the Secretary of State and the Mayor of London agree with our policy and that this is the only suitable site in the area.

“Any other decision or cause for delay would have been a disgraceful betrayal of the children of that area of Hayes.”

The school, which the council wants open by 2015, will accommodate 630 children.
0 comments

I am emailing with further developments with regard to the building of a school on Lake Farm.

As you are aware Hillingdon Council forced through its Planning Committee plans to build a primary school on Lake Farm Country Park set in the green belt.

The issue for us now is that even with full planning permission the council cannot legally build on Lake Farm because of the Section 106 agreement it entered into with Stockley Park over the development of the "Trident" site.  This was raised at the planning meeting but the legal officer dismissed this as not relevant to the application in front of the committee.

This has resulted in the council employing a QC for legal advice.  The advice the council has been given is to either seek the permission of the other party to the agreement (i.e. Stockley Park) or if they wish to proceed without that permission, they can advertise an appropriation of open land for development and then after considering any objections they can disregard any legal agreement.

I am urging residents to sign the petition of objection or to write to the council with their individual letters of objection.

We do not have much time as the closing date for objections is 30th April.

Please sign the petition, encourage your friends, neighbours and members of your organisation to sign it and return it to my office by 30th April.

HILLINGDON Council has taken a major step towards building its much-opposed primary school at Lake Farm Country Park, after the Mayor of London gave the project his backing.

Boris Johnson announced last week that he would not intervene in the borough’s plans to build a school on three hectares of green belt land, at the eastern end of Lake Farm Country park, off Botwell Lane, Hayes.

Mr Johnson has been persuaded that the necessary ‘very special circumstances’ – the urgent need to provide extra primary school places – outweighs the loss of green belt.

In his report, he states the search for alternative sites, 26 were considered in total, was ‘robust’.

The council approved the proposals during a stormy meeting in March, when councillors were heckled by a crowd of protestors.

The following week, Hayes and Harlington Labour MP John McDonnell took campaigners to City Hall to deliver letters to the mayor, urging him to use his powers and overturn the decision.

Mr Johnson’s approval has infuriated Mr McDonnell, who called it a ‘disgraceful betrayal of our local community.’

The progress of the development is now solely down to the Secretary of State, who also has to consider the application. His decision is imminent.

Councillor Ray Puddifoot, the leader of the council, said: “We are extremely pleased that the Mayor of London has recognised the importance of a good start in life for the children of Hayes and supported the building of a new school at Lake Farm.

“Opponents of the scheme have been given every opportunity to come up with an alternative site, but nothing feasible has materialised so we need to press ahead with the agreed proposal.”

The school, which the council wants open by 2015, will accommodate 630 children.

One final hurdle, an agreement with the developer of Stockley Park from 2000, under which cash was given for the maintaining of Lake Farm as a ‘public open space’, should be jumped soon, using planning law to appropriate the land.
0 comments